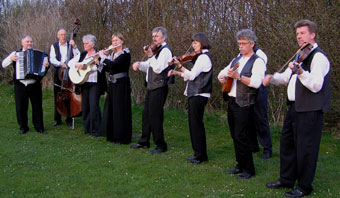 Revl & Krat is a group of happy fiddlers (male and female) who play and sing Danish folkmusic.

There are 13 people in the group, 6 playing the violin, 1 the mandolin, 1 the flute, 2 accordions, 1 keyboard, 1 the double bass and 1 playing the guitar.
Revl & Krat started by chance in the autumn of 1977. Our first public performances were at the family- evenings at the old people's home, later we dared to try on bigger stages, and soon we were famous in the whole of Helle municipal and other places in the western part of Jutland.